Let’s talk a bit about calendars used by the Timeline. As you probably know, the calendar reform that replaced Julian calendar with Gregorian calendar took place in 1582. If you look at October 1582 on the Timeline, you’ll see that October 4th is immediately followed by October 15th.

October 4, 1582 is the last Julian date, and October 15, 1582 is the first Gregorian date. As far as I know, any dates before the calendar reform that you can find in pretty much any historical literature are Julian dates. So, when it comes to the Timeline, it makes sense to use Julian calendar for dates up until the reform and Gregorian calendar for all the dates after the reform. That’s why when you enter dates earlier or equal to October 4, 1582, the program assumes that those are Julian dates. Dates from October 15, 1528 and onward are assumed to be Gregorian.

Put these instructions into the Editor:

and you’ll get this: 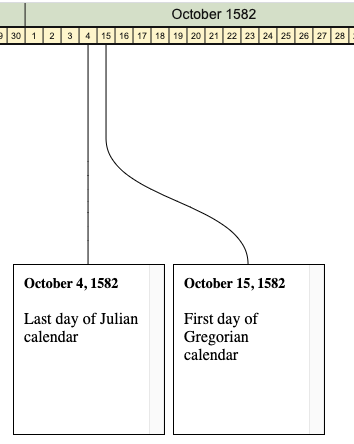 If you open the Menu and select to show Julian dates after the reform, you’ll see that in Julian calendar those dates are just 4th and 5th of October. 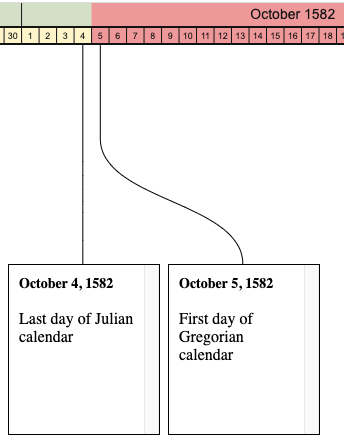 When you create events using sources with Old style dates (i.e. Julian dates after the calendar reform) you need to convert those dates into Gregorian dates. It is easy to do with the Parser.

A few facts about Julian calendar: